Quick recap from yesterday's race. I promised myself I was going to start writing more even if there isn't an overarching, grand, story-behind-the-story. I also decided that I am going to be a little more candid about how I was feeling during the race; I mean no ill-will, just stating things from my perspective.

From my short experience as a coach so far, I have heard all too often that the biggest set back people have is mostly mental/confidence issues. Most athletes have no problem putting the work in, but keeping their heads and thoughts together on race day is difficult.

I don't claim to have answers but I can relate to the feeling. Step one is to put yourself in the situation as much as you can so you are familiar with it. Step two is to know that these feelings will come on no matter how prepared you think you are. Step three is, you guessed, just "act as if" (yeah, spoiler alert, I don't end up winning this race, so I have got to plug myself somewhere in these rambles, alright? Haven't you got that yet?...Stay with me).
So here we go. Confidence or no confidence... 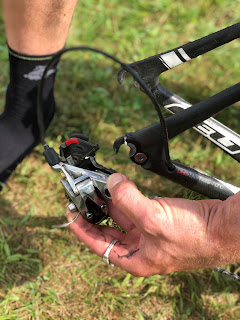 Posted by haffatree at 6:50 PM